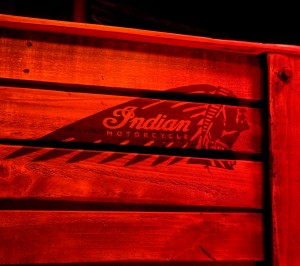 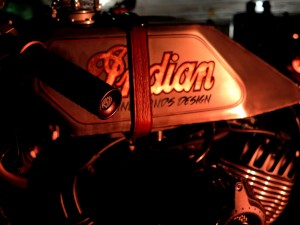 In true Robert Pandya fashion, comes the last minute cryptic press release invite.  It is on the eve of the International Motorcycle Show this weekend in Long Beach.  The party located nearby in an abandoned warehouse at the Ports of Los Angeles.  His brief statement…come see the new Indian Scout 60 along with some “goofy” fun!  I’m in!

I stare at an Indian Scout everyday.  A black and white picture of Marjorie Dare, riding one with no hands on the Wall of Death in 1938.  Under it the caption…“Be daring, be different, be impractical, be anything that will assert integrity of purpose and imaginative vision”. – Cecil Beaton.   I am curious to see the newest version.  I am not disappointed.  The new Indian Scout 60 is quite the vision.  So is the Roland Sands “magic” that the five Super Hooligan Wrecking Crew racers were wearing along with Ohlin shocks.   Definitely daring and different.  I now have a new case of the “wants”…especially since the Scout 60 is affordable, the base model starts at $8999! 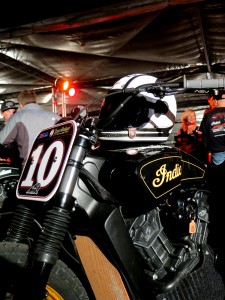 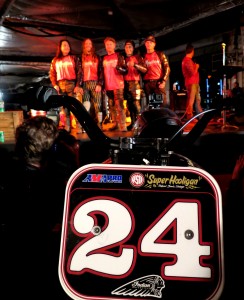 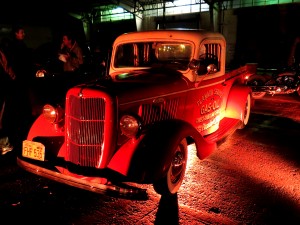 The Indian Scout 60 release party was definitely fun, and not at all “goofy”.  It was first class fun.  I decided to ride over on my ’67 Triumph Trophy (with Bonneville head).  I forgot, it’s been sitting for almost a year…I am a bad mom and paid for that.  My right leg and back got a workout trying to kick start.  The obnoxious motorcyclist at the stop lights, the pilot jets being dirty, the bike will not idle.  Shorty pipes but don’t help with noise abatement laws, but look cool as hell, and sure help with freeway lane splitting in rush hour at night! I pour in some “Mechanic in a Bottle” into the tank and take off.   Arriving at the address, the only sign of the event was the lone night watchman waving a flashlight at the gate. 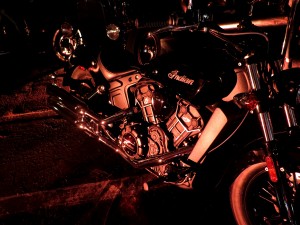 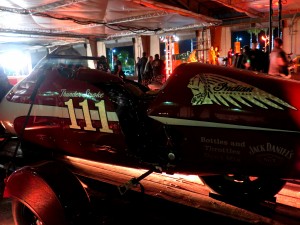 The warehouse was the same used for the movie the Italian Job.  A great blues band playing as well as flat track setup.  The bar and food were great, as were all the old cars, trucks, props, and of course, the Indian motorcycles parked all around.  The warehouse lighting was dark with cube lights casting shadows in all the right places.  It was a shame the racing was short, but it got the crowd fired up.  Besides the Indian Scout 60, the other new Indians were present, the Classic and the Warrior, were some old ones.  As well as the ThunderStroke 111 land speed bike.  And several more models that Roland Sands has been waving his wand over.  Beautiful, all of them.  Definitely asserting purpose and imaginative vision. 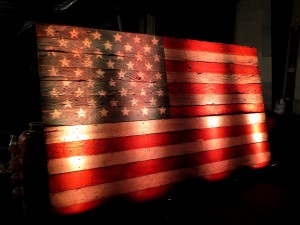 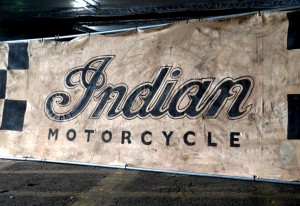 The Indian and RSD team is a great match.  Polaris is hitting home runs lately, with their Victory, Brammo, and Indian brands, a nice line up of motorcycles.  Also the Slingshot if you want to try a three wheel adventure.  Something for everyone…and an American company!!!